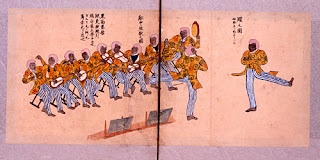 ABOVE: A depiction of the minstrel show that Matthew Perry organized for the Japanese to stir hatred of Africa in Japan.

The following was part of a lesson taught at my Racism and American Policy class this semester:

For hundreds of years Africa and China shared a peaceful and beneficial relationship based on mutual trust. The two great powers traded both goods and cultural lessons. For example, Africans introduced the Chinese to advanced mathematics and medicine while the Chinese introduced silk to Africa.

By the mid-nineteenth century whites in America grew increasingly alarmed about the Africa/China relationship. By this time America had already kidnapped and murdered millions of Africans and wanted to invade the African interior to rape the continent of its natural resources.

White America feared China would come to the aide of Africa and find itself at war with the Eastern power. It was decided that America would force an alliance with Japan in order to threaten the Chinese with an American/Japan union to keep the Chinese in check.

It was known that Japan was an isolated nation and quite possibly knew little or nothing about Africa. The Americans decided to exploit this and introduce racism among the Japanese towards Africans to form a lasting hate of Africa.

In 1852, America sent the warmonger Matthew Perry with a fleet of warships to Japan. Perry’s mission was forge a union with Japan, instill racism towards Africa and hate towards China.

When he arrived in Japan, Perry organized among other things, a minstrel show to “entertain” the Japanese. Perry had also brought with him a number of African slaves to show off to the Japanese. He wanted to show the Japanese that Africans could be chained and controlled and he spread lies that Africa had plans to attack Japan with help with the Chinese.

The rest as they say is history. Japan became a militant power and eventually attacked and occupied China. In fact, Japan grew so aggressive due to American influence that it eventually attacked the United States at Pearl Harbor in 1941.
7 comments: