Will the white man allow Obama to get into the White House?

If they are willing to kill one of their own in JFK, able to kill Malcolm X and Martin L. King then why wouldn't they kill Barack Obama, a African with a Muslim name?
10 comments:

The racism of the America Space Shuttle 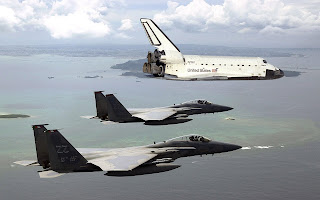 The American Space Shuttle is nothing more than an expression of American militarism and the white man's quest for power and domination.

The white man is fond of technology. He is souless and disconnected from the Earth so the white man feels a constant need to use technology to rape the Earth or to abuse nature. We see this in the white man's factories of pollution, global warming or in the Katrina attack on New Orleans in 2005.

Look at the space shuttle. It is nothing more than a giant white phallus sent to orbit the Earth as a hostile errection threatening rape. It does nothing to help humanity.
21 comments:

UPDATE: The racist goal of the white man with Asian women

Above is a banner ad on the official website for Suprise, Arizona. Note the image of the nearly white child produced by the white man and his Asian breeding partner.
For more information see this previous post:
79 comments:

The racist shape and message of Oklahoma

Oklahoma appears as a blood-stain reminder of American racism
Every state in the United States represents a racist crime of genocide, oppression and murder.

For thousands of years, the indigenous peoples living in what is now called “North America” lived peacefully. The arrival of the white man from Europe represented nothing more than a death sentence for these people.

The indigenous peoples were attacked and enslaved by the white man. Their land was taken from them and their cultures destroyed.

By the mid-19th Century the white man had reached the North American intertior. It is estimated that by 1850 over 4 million indigenous people had already been killed. Millions more were pushed off their lands and were forced to retreat to the west.

The area known Oklahoma became a giant prisoner camp where thousands of indigenous peoples, including those making up the Cherokee, Chickasaw, Choctaw, Creek, and Seminole tribes were held.

Almost as a joke, the white man decided to shape the borders of Oklahoma into the form of a hatchet or a cleaver knife. This was intented to serve as a message to all people of color that the white man whould either imprison you or kill you.

The final indignity was when Oklahoma was annexed into the America and became one of its states in 1907.
8 comments: 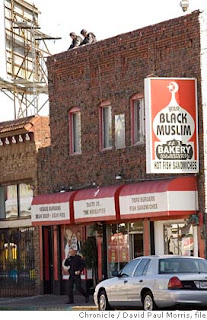 A white federal judge on Thursday ordered Your Black Muslim Bakery, a 40-year-old purveyor of all-natural desserts that has been linked to the alleged slaying of an Oakland journalist, to liquidate its assets.

According to the white man, the business is more than $900,000 in debt to the IRS, individual creditors and Davis Mortgage Investment Fund of Oakland. Its assets are about $1.9 million, according to its Chapter 11 bankruptcy filing in October. The bakery's chief executive, Yusuf Bey IV, 21, is in custody on false kidnapping charges after his arrest Friday in a police raid on the bakery, which was shuttered. If the bakery had nearly two million in assets why would owe the white government $900,000?

Another bakery employee, Devaughndre Broussard, was arrested based on police claims that he "confessed" to last Thursday's slaying of journalist Chauncey Bailey, editor of the weekly Oakland Post.
30 comments: