African politicians being targeted by the white power structure in America 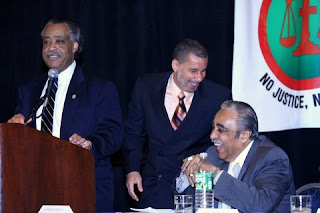 The attacks on Barack Obama have just begun and they will get worse in the coming months. The new African governor of “comes forward” with stories of infidelity less than 24 hours in being in office. And today, it is reported by the white media that the African mayor of , Kwame Kilpatrick, has been charged with perjury.

The white power structure is clearly nervous that there may be an African in the White House in 2009. An Obama Presidency can reverse hundreds of years of aggression and oppression towards the peoples of and in desperation, we can expect the white man to use every trick in his book to stop that from happening.

My sources tell me that it is an absolute fiction that Governor David Patterson of was never less than faithful to his wife. Patterson has always been known as an African man of the highest integrity. But white men in forced him to admit to these false charges of immoral behaviour. It was the only way they would allow him to assume his proper and legal role as Governor.

We will keep an eye on the situation with regard to Kwame Kilpatrick. There is every reason to think these are trumped up charges.

The Racism of "Lost" 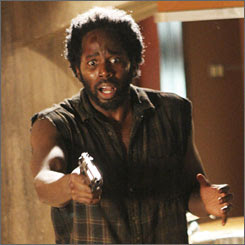 In "Lost", Africans are depicted as being unstable, murderous, deceptive and dangerous. Michael (pictured above) is portrayed as an erratic individual who is easily manipulated by the white man.

An African man who survives the plane crash with his son is depicted as a somewhat mentally-unstable individual who quickly resorts to violence. He has a white slave-owners name (Michael Dawson) and Michael murders women, fights with a Korean and shown to be weak-minded and easily manipulated by the white men who control the island.

In the most recent insult, Michael is forced join the crew of a ship as a mere deckhand who mops the floor. Michael is the stereotypical image of a house-slave ready to do the white man’s bidding.

Other offences: An African man called Mr. Eko is portrayed as being murderous drug dealer and there are “flashback” sequences which depict as a place where armed drug dealers rule the land and create violence and mayhem.

An unnamed African woman BEGS a white man to shoot and kill her and there’s a monster on the island which shown to be black smoke, another false metaphor representing the white man’s fears of .

As Alla Kimmendae writes, “The white man at his very core fears what he does not and cannot understand. He has no soul and is unable to escape his innate bias and hatred”.

The African Governor of New York

The state of New York now has an African man as governor in David Paterson. Paterson has long been a target and victim of white oppression. When he was only three months old, he was blinded by a white doctor and his family still bears the name of the slave owners who stole his ancestors from Africa many years ago. But we wish him well and we hope he can help his fellow Africans.
5 comments: