We will only accept justice for Trayvon Martin 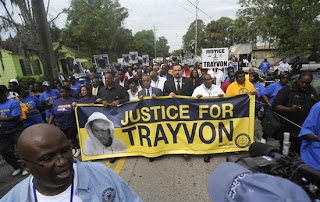 When our Leader Barack Obama became president in 2009, many proclaimed that America could finally achieve racial justice. I was among them and I still believe in our Leader and his ability to bring America to justice.

A society based on racial justice would be one where the capitalist exploiters no longer rule by institutionalized or structural racism, in which white supremacist policies and attitudes are propagated by the super-rich and, through various arms of state repression, imposed on the masses.

But has America become a society based on racial, social and economic justice? No, not yet. But we are making progress thanks to our Leader. Yes, we we know there is work to be done and our Leader knows this as well.

If you were to ask an Indigenous person barely subsisting on a reservation in America, an undocumented worker from Latin America or an African facing deportation, or an African-American in the rural South or Harlem, nine times out of ten the answer would be an emphatic “No.”

But thanks to our Leader we have hope. Something that did not exist in America before our Leader came to power.

We know that are dark clouds in that light of hope. One of them was the assassination of Trayvon Martin, who was stalked and then murdered by George Zimmerman.

The killing of Martin is not isolated event. It was a politically motivated attack born in the genocidal policy of targeting people of color. It was an attack on our Leader.

A great perversion is the Zimmerman’s defense team strategy is to turn everything upside down and make it appear that Trayvon Martin, the victim, racially profiled Zimmerman, and not the other way around. They want to convince the jurors that Martin was the aggressor and had no right to defend himself against an armed vigilante. This attack on the truth is deeply offensive to all who seek justice.

But the people demand justice and we shall have it. We should be prepared to respond in the streets with righteous anger if the jury of six women, none of them African American, sets Zimmerman free to threaten more people of color.   Our Leader expects this of us and we must not fail him.

A Son Of Africa Returns

This has been a glorious week as our Leader, President Obama tours the land of his forefathers. 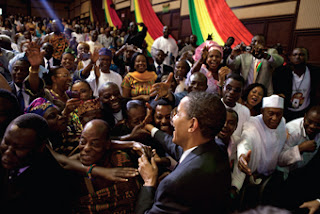 Africa welcomes back their son.

The world today is safer and justice is being established because our Leader, President Obama is a true son of Africa.
6 comments: